Mensiversary of the “Unique” Coup

Today, the 7th of March 2012, marks the one month period that has passed us by since the coup that shook the very foundations of our society happened. We have come to a point where friends and foes alike are at an impasse, agreeing to disagree on whether what took place that day was in fact a coup or a constitutional transfer of power.

Me, I stand by my verdict that it was indeed a coup unless an independent and impartial investigation proves it otherwise. I belong with the group of people who truly wanted the change that President Nasheed so passionately spoke about and indeed worked tirelessly to bring to a country where most of us living in the outer islands have been practically “starved” in their need for development and societal growth.

Today, Nasheed is once again an ordinary citizen just like the rest of us, who was dragged through the streets like a common thug on the day that he came out and informed the public that he was forced to step down from power. Though the people in power today ridicules his statement, the events that continues to unfold since that fateful day tells a story of its own, driving home the point that it was indeed NOT a constitutional transfer of power as people would like us to think.

I would forever see the 7th of February of 2012 as a black day. It was the day that the traitors in this country butchered up democracy in its infancy and hit it where it hurts, robbed the people of their constitutional rights as Maldivian citizens and taught the believers of this change that a society rife with corruption is one where an inherent kindness in the elected leader would always be taken advantage of.

February 7th was the day that the Police and Military of this country turned rogue and turned their backs on the very values that they vow to uphold and protect at any cost. It was the day that the fans of the previous regime came out onto the streets and celebrated while people like myself found comfort with likeminded souls who were reeling from the sheer impact and utter devastation of the loss.

It was the day that drove home the point that President Maumoon was in fact right about one thing when it comes to the country he ruled with an iron fist for 30 long years. That the Maldives and its people are indeed not ripe for a change such as democracy. President Nasheed was someone who always advocated that people needed to “grow” in order to embrace and benefit from the best form of governance that mankind has ever seen. And sadly, for the Maldives and its people, today, we find that democracy is more of a myth and an elusive dream that just moves further and further away as the days pass by.

Even as I write this post, I want to give a shout out, a word of thanks and a word of encouragement to each and every single one of you who are working tirelessly to turn this around, to once again give back people their rights to democracy, the right to vote and the right to elect the leader they want in power. 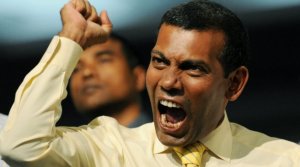 Democracy means accepting the ideology and the beliefs of the majority even if that may not mean the best path for the country to walk upon. The saddest thing about Dr. Waheed’s ‘government’ is their ability to turn a deaf ear to the people’s voice, their response towards the multitude of peaceful protesters that takes to the streets everyday bordering on utter violence  and use of brutal force that Maldives has not been witness to in the past 3 years.

President Nasheed maybe labeled as a lot of things, but a tyrant he was not. And that is one reason why I would continue to hope and pray that he be the person to once again turn our country around, lead us down a path that would indeed mean a light waits at the end of this endless tunnel of utter despair and hopelessness.

It is my prayer that Almighty Allah gives us all the courage and the wisdom to choose our battles wisely, and to grant us victory over the traitors of this country, men and women whom I would never ever forgive nor forget as long as I continue to walk this Earth.

Like Mahatma Gandhi once said, “The spirit of democracy is not a mechanical thing to be adjusted by abolition of forms. It requires change of heart.”

3 thoughts on “Mensiversary of the “Unique” Coup”