Would they or wouldn’t they? 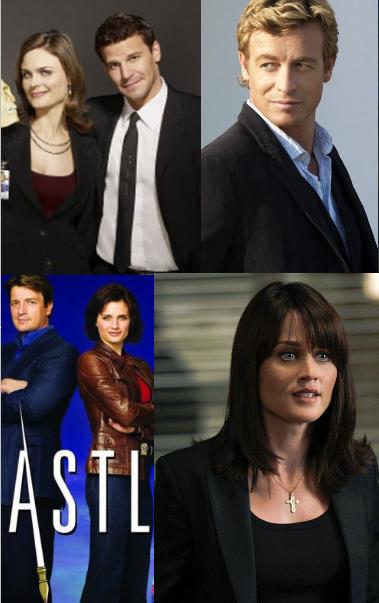 Anyone who avidly follows the various series that comes out in the US would definitely know what I am talking about. Especially those that follow the crime dramas such as Bones, Castle, The Mentalist etc would by now have a gut feeling on what exactly I am talking about here.
Out of all the dramas that I do collect and watch, the three mentioned above are those that I do watch regularly most of the time the day after they air in the US. Its not only the aspect of crime solving that leaves me coming back for more, its the character development and storyline that keeps us viewers grasping for something that will never reach fulfillment, at least not anytime in the future.

I got hooked on the series Bones because for one thing David Boreanaz is the lead actor in the series. Combined with the fact that Emily Deschanel who plays the role of Dr. Temperance Brennan, the scientist who remains sort of clueless to actual human emotions spars with Booth (David Boreanaz) on regular basis whilst Bones (Dr. Temperance) tries to convince Booth that heart is just a piece of muscle whilst Booth wants to convince Bones otherwise and added to that the story development of the various other cast members in the series makes it highly entertaining. But what keeps me and most of other Bones fanatics on tenterhooks every new freaking episode is the age old question, would they or wouldn’t they at last get together on this episode? Would this be THE episode and so on!

So far us viewers have been cheated out on this in really sneaky ways. Take for example the season finale of the last season of Bones. After watching the episode after such hype was created regarding it by the producers of the show, I was so disappointed that I felt like smashing the screen of the televison and went as far as to vowing that I wouldn’t watch the current and new season of bones. Alas, it wasn’t to be, because maybe I am just a bitch on myself? This season the story is all about how Booth surviving his brain tumor surgery, at last wants to confess of his love to Bones, but is prevented by Dr. Sweets, the FBI’s psychiatrist’s advice against it for the time being. And I let myself be tortured every single frigging episode of this season waiting in breathless anticipation for the final moment in which Booth would declare himself to Bones. Duh!!

And yes moving on to Castle, which I got hooked onto pretty quickly after watching the first episode is the next torturous element. Why do the blasted producers have to create the chemistry between two characters and not deliver on it I would never know. I have read several discussions on the topic and most agree that its because producers are mostly afraid that viewer ratings would drop once the climax of the show has reached. Others are convinced that getting the two main characters involved romantically ruins the crime solving aspect of the show and that there would be no more room for growth in the series to which I totally disagree. We have all witnessed how great the Friends series was because it had the best of endings that anyone could ever hope for. And the currently ongoing comedy The big bang theory doesn’t seem to suffer any such horrors of drops in viewer ratings just because Leonard and Penny at last got romantically involved together.

And don’t get me started on Mr. Patrick Jane (whom I continually drool upon) and Lisbon in the Mentalist. Jane is so appealing and sexy and Lisbon is the opposite of all that (which I don’t mean in a bad way) but rather that they complement each other on these levels, seem to be headed towards the same dismal storyline as well. At least Jane has his revenge and vengeance to get over before he can even bring himself to acknowledge that he is a free man. Sigh!!

But being the stubborn headed fool I am and the one who always spins romantic tales in the air or build castles or whatever it is that you build in the air, I would continue to watch every episode that comes out, bear it whilst gritting my teeth, and wait hopefully for the next episode or the next season where at last my dreams may become realized, or NOT!